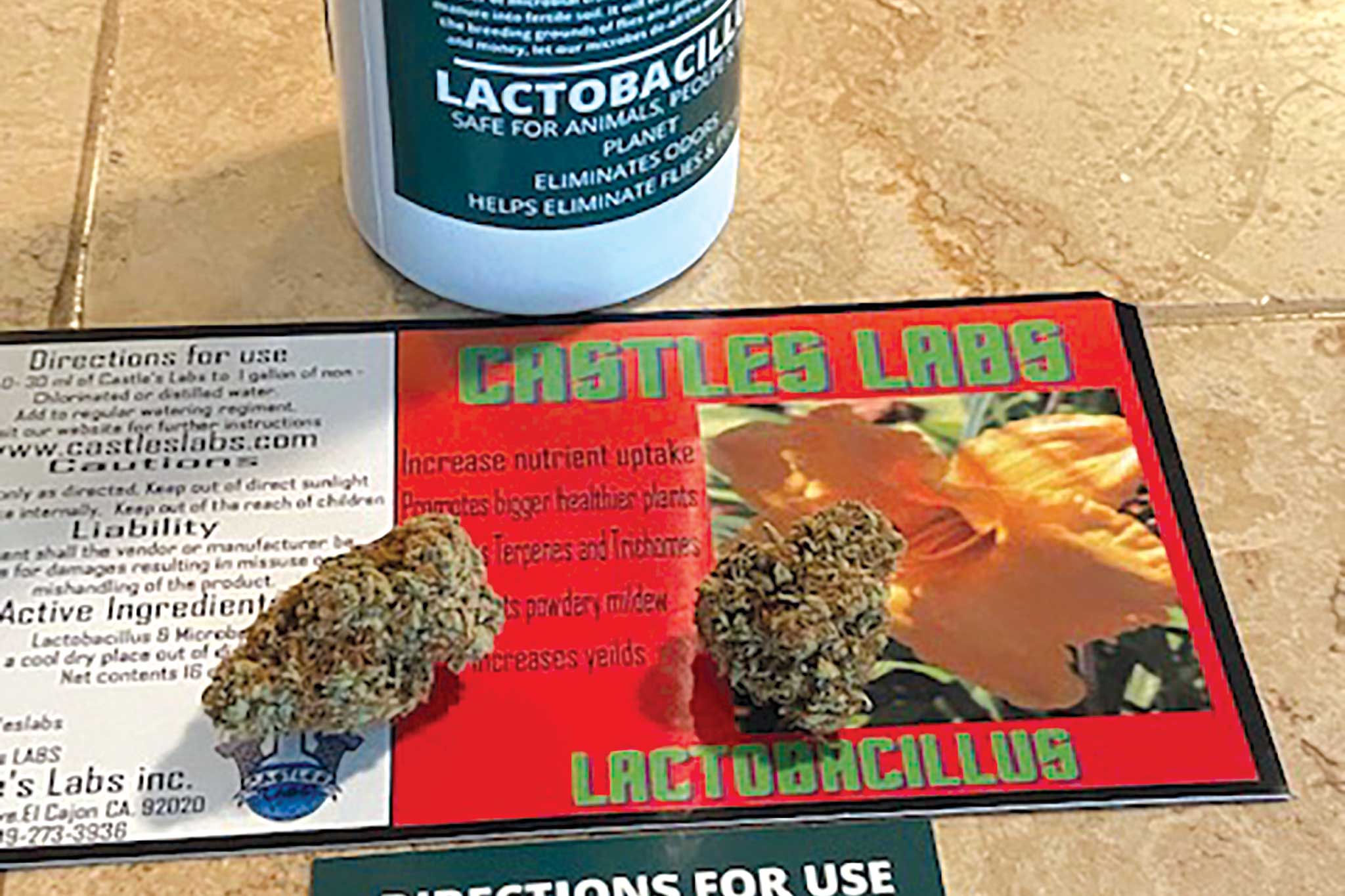 The product and the proof.

The product and the proof.

Kurt Castle, founder and creator of Castle’s Labs, creates products that help with all sorts of flora and fauna management. His Plant Magic is “an organic probiotic spray that promotes bigger, healthier, chemical and pesticide free plants. It’s great for cannabis, because it increases terpenes and trichomes, and it ups the yield by at least an ounce. It makes bigger healthier leaves, and more developed, tastier buds.” He also says that it’s a GRAS product, which means it’s Generally Recognized as Safe by the FDA.

I visited Kurt at his compound in El Cajon to get a more in-depth look. When I arrived, the first thing I noticed was that he and his family live self-sustainably. They grow their own food — not just for themselves, but for their pets as well. I spotted banana trees, pomegranate trees, pluot trees, potatoes, and some big, big cannabis plants. I don’t know exactly how many plants he had, but what I saw were more like trees than plants. They were taller than I am, and I’m six feet tall. We then traveled to a neighbor of his down the street; Castle wanted to show me his neighbor Drew’s plants as well. Look up backyard.harvesting on Instagram to see his work. He’d been using Castle’s Labs products for five or six years, and said it grows bigger, healthier and bigger buds. His plants — or trees, I should say — were taller than I am as well. He was growing Item 9, Candyland Peyote, Blueberry Mazar and Freakshow, and he was nice enough to provide me with some buds to help me with my field tests.

But wait, there’s more! Not only are Castle’s Labs products good for cannabis growth, they’re also good for removing odors in compost and animal waste, and for breaking down manure. Castle discovered this when he was making his first batch six years ago: he thought he was doing it wrong, because it “stank bad.” Frustrated, “I dumped it in the pig pen where he goes to the bathroom, and a couple days later I didn’t smell it anymore. As a matter of fact, I didn’t smell pig shit anymore either. I then dumped some in the chicken coop, and it eliminated all the odors in there.” I can attest to not smelling any odors from the pig pen or chicken coop, and to the cannabis buds having a cleaner taste.

The spray is lactobacillus based, and gets mixed with water. Per Castle: “The probiotics grow microbes that break down the organics in the soil, and break poop down into soil. Homeostasis. My spray is good for all plants, trees, and fruit trees, not just cannabis plants.” He did note that “repeat applications are necessary for best results to get the microbes to colonize when you’re using them for odor control.”

You can order Castle’s Labs products at www.castleslabs.com, on Shopify, or by calling 619-273-3936. A 16 oz. bottle costs $29.95, and a gallon $69.95. Castle dreams of branching out and getting bigger. He’d like to clean up the big manure piles on commercial farms, and to help clean homeless encampments. We parted with him saying passionately, “We can fix the planet!”