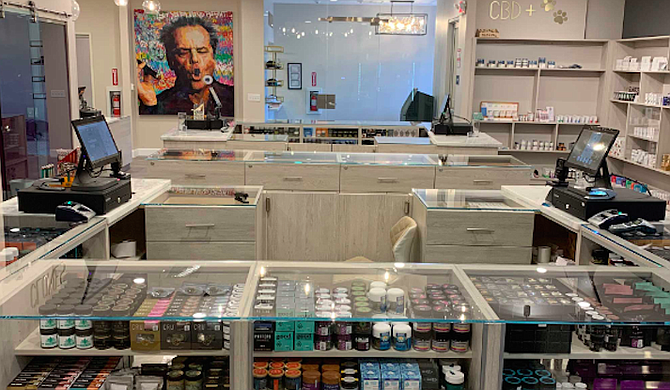 Off The Charts Cannabis is located in Vista.

Off The Charts Cannabis is located in Vista.

“The state got us last time, and apparently a pandemic got us this time.”

David Newman admits that his second attempt to allow legal pot shops to open in Oceanside is now dead on the vine. He and members of Oceanside Voters for Safe Access have decided to pull the plug on their efforts to get signatures for the their initiative. If enough valid signatures were collected, voters in November could have forced the city to allow dispensaries to open in Oceanside, defying city council.

Newman spearheaded a similar pro-weed initiative in 2018 which was abandoned. “Safe Access” supporter Dallin Young says only 3,000 signatures had been collected for this current petition as of February. The 180-day window to collect 9,609 signatures closes May 15.

“This virus puts all petitions on hold,” explains Newman. He says the only thing that would save the Safe Cannabis Act petition, would be if the governor would sign an emergency act that would allow people to sign petitions via the internet. “But I’m not holding my breath on that.” Insiders say two petitions to recall two councilmembers in Oceanside have become dormant.

Meanwhile the six dispensaries open in next-door Vista are thriving. They were allowed to exist by the citywide passage of Measure Z in 2018. On a recent Sunday evening, a security guard at Up North Cannabis on Vista Way was checking patrons with a body temp scanner. No one with a fever got through the second glass door to buy Grape Krush or Sugar Mints buds. There were about five patrons inside. Flora Verde on Santa Fe Avenue had about the same number of clients. Vista dispensaries only sell to those with a medical recommendation.

“I was doubling my business every three days before the Corona hit,” says Mike Mellano whose Coastal Wellness has only been open in Vista for five weeks. “If it hadn’t hit, I’d be killing it.”

Mellano says after the mass COVID-19 shutdown of three weeks ago, all the Vista dispensaries showed an immediate surge in business. “From what I heard, everyone had a big rush. Everyone out there was stocking up. Now it’s a little slower. I’d say we are doing 30 percent less of what we were doing that big week. Now it’s normalized. There’s not a ton of growth, but it’s steady.”

The city of Vista has issued 11 cannabis licenses. Mellano says the six that have opened so far are friendly with each other and with the sheriff deputies and city staff who visit. His beef is with the black market. He estimates that at any given time there are four to six illegal shops operating in the unincorporated county area between Vista and San Marcos.

“A month or two ago they closed down a shop in that strip and the very next day it looked like they opened up across street,” says Mellano. “It used to be it would take a month to close them down the second time. In this case they closed them down immediately. It seems like law enforcement is speeding up, and that’s a very good thing.”

Mellano says he would like it if the Vista dispensaries that can now only sell only to medical patients, be allowed to switch to adult use (recreational use). He says it is conceivable the Vista City Council, long adverse to marijuana retail, may see the light now that traditional tax income is reaching pandemic lows. “I’ll be making my first tax payment, which is seven percent of my sales, to the city on the 30th. They’ll be seeing a bunch of new tax revenue from us which would probably double if we went to adult use.”

Flora Verde was the second dispensary to open in Vista when it debuted six months ago. Owner Justin Christman says his store is about to make its second quarterly payment to Vista. “This one is almost triple of the first.” He adds that with the six dispensaries open, there is enough profit for everyone. He says only time will tell if eleven will be too many once the other five licensees open. “It’s like supermarkets, you can only have so many to be viable.”

Is Vista’s tax base benefitting from the fact that Oceanside and Carlsbad have no cannabis storefronts? “I would say that 20 percent of our business comes from customers outside of our five-mile radius,” says Christman.

While Oceanside does not permit dispensaries, it has passed ordinances allowing cultivation, manufacturing, and delivery. So far only one applicant, a delivery service known as MedLeaf, has made it to the conditional-use-permit stage. Manager/spokeswoman Gracie Morgan says Covid-19 has apparently slowed down the approval process: their March 25 approval hearing was postponed indefinitely.

“We want to work with the city, and have a ribbon cutting, and make cannabis legitimate just like any other business,” she says.

Once open, Morgan says the Medleaf business on on San Luis Rey Road in the Oceanside Industrial Park will employ ten delivery drivers. She says Medleaf’s main competition will be black market delivery. “We need to have legal delivery with licensed metric tracking.”

But what harm does black market cannabis delivery cause? Lieutenant Matt Cole oversees special enforcement for the Oceanside Police department. Before that, he served as a watch commander. He says that according to his experience, he is not aware of much crime activity associated with the home delivery of cannabis.

Oceanside Planning Commission Chairman Kyle Krahel signed on as proponent of the Oceanside Safe Cannabis Act. He says it is an “inevitability” that Oceanside and Vista will eventually allow regulated recreational retail shops, although it may be necessary for “new blood” to arrive at each city council. “The ship of state turns slowly.”