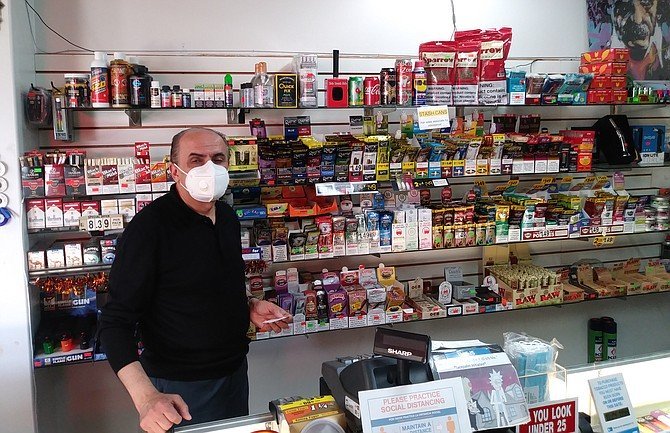 Shon Elfarra: “Vaping is 40 percent of my business."

Shon Elfarra: “Vaping is 40 percent of my business."

“He is absolutely unwilling to listen”

Update: Minutes after this story appeared, James Canning, spokesman for Nathan Fletcher, said, “The Vaping Ordinance will now not come back before the Board until September.”

“They are trying to force people to stop vaping, but this will not do it.”

Shon Elfarra owns a small shop in Fallbrook called Smoke Chalet. He says a new countywide law may put him out of business. The specifics of that new law are to be unveiled at the next county board of supervisors meeting on May 19.

“Vaping is 40 percent of my business,” says Elfarra. “How will I make it?”

It has already been decided there will be a new anti-vaping ordinance that will go into effect July 1. It will forbid all stores in the unincorporated areas of the county to stop selling vaping devices for at least one year, and place a complete ban on flavored vaping liquid, and all flavored tobacco products including mentholated cigarettes.

Elfarra is one of four businesses in Fallbrook who exclusively sell smoke products. Those stores, plus about 32 others in Alpine, Ramona, Spring Valley, Campo, Lakeside, Jamul, and Rancho San Diego will see a huge part of their income evaporate.

“Those 36 businesses will be completely out of business,” says Molly Sylvester of El Cajon who owns Vapin’ the 619 located just outside her hometown. She is the chairwoman of a group called Communities for Safer Vaping. “And then you’re talking about another 150 businesses like the liquor stores and gas station markets who sell vaping products. They will lose five to 25 per cent of their business. When it’s that much, now you’re talking about employees losing their jobs.”

There is just not much money to be made in retailing cigarettes says Elfarra. He says he makes about 49 cents per pack. “I will spend $79 for a carton and then sell each pack for $8.39.”

An employee at a different Fallbrook business who asked his name not be used says his store absolutely supports the idea that minors should not be allowed to buy vaping products. He says he is happy that the state sends in decoys to prove that no one under 21 can buy tobacco products. “But all kids have to do is go online and click a box that says they are 21 and they can get anything they want sent to them.” And he says that if his store is no longer allowed to sell vaping products, Fallbrook locals need only go to Vista or Oceanside to buy from a storefront. None of the county’s 18 cities ban the sale of vaping products.

County Supervisor Nathan Fletcher spearheaded the anti-vaping ordinance last fall, and he was successful in getting fellow supervisors Greg Cox and co-author Dianne Jacobs to sign on. Fletcher did not respond to a request for comment for this article made through his press aide James Canning.

Supervisor Jim Desmond voted against the anti-vaping law as half of the losing end of the 3-2 minority. His North County district includes Fallbrook. Desmond says he anticipated that the new law may indeed snuff out small Fallbrook businesses like Smoke Chalet, Holy Smoke Shop and Fallbrook Smoke Shop.

“We’ve heard from many businesses who are struggling, which we knew would be the outcome when this [ordinance] was passed,” says Desmond. “It’s unfortunate for businesses on the brink of going under.”

Every retailer contacted agreed that the major public health concern involves the well-publicized vaping of marijuana/THC. That vaping has been linked with permanent lung damage and some 60 deaths nationwide since it is often ingested with the harmful “Vitamin E”/acetate additive. Desmond says this new county law, “…doesn’t address the actual issue. The actual issue of [vaping of] THC products that are harming people across the county.”

At the May 19 meeting it will be explained how the county’s health department infrastructure will be redirected to implement this anti-vaping law. But is this the time to start turning busy county health officials into vaping police?

“At a time like this, we need to focus our time, energy and resources on safely re-opening our economy, not on implementing new, unnecessary ordinances,” says Sylvester. She says she has no problem with the establishment of a countywide tobacco retail license.

“I knew of a couple in PB who were selling to minors for over a year,” says Sylvester. “I don’t believe in getting involved in other people’s business, but last year I decided they were detrimental to the entire business. So I decided not to be quiet any more. We told the police.”

As Sylvester sees it, Supervisor Fletcher is actually harming the health of the county since vaping is used by many to get off cigarettes. “He wants to eliminate the product that is saving lives. He wants to leave cigarettes on the market which is responsible for over 480,000 [U.S.] deaths a year.” She says that all but one of the 60 deaths in the U.S. reportedly caused by vaping were connected with cannabis. “And the one that was not [cannabis-related] had pre-existing health issues. Vaping THC with the Vitamin E/acetate additive caused all the deaths and now Fletcher wants to demonize the whole vaping industry. But we have nothing to do with that.”

Sylvester notes that Fletcher has historically been pro-pot. “He is an advocate for cannabis. That’s why he refused to even say the word ‘cannibis.’ He won’t talk about it [in connection with vaping] because it doesn’t fit in with his political agenda.”

Ramon Mansour of El Cajon is the co-chair of Communities for Safer Vaping. His family is a longtime wholesale supplier of vaping products to many area stores. He says none of his stores sells to anyone under 21 and his company does not market the Vitamin E/acetate additive. He says Fletcher has turned this law into an opportunity for “grandstanding.”

“We’ve tried multiple times to reason with [Fletcher] but he is absolutely unwilling to listen,” says Mansour. “This guy has a particular agenda and he wants to stick with it…. Part of this law will also outlaw the sale of Newport cigarettes and flavored pipe tobacco like Cherry Cavendish. What does that have to do with youth vaping?”

Mansour says Communities for Safer Vaping has hired an attorney and may consider a lawsuit against the county. He declined to name the attorney.

Not all merchants have a clear understanding of what the new law may bring. Jimmy Malee says he understands his Holy Smoke Shop in Fallbrook will not be impacted by the new law because his store has moved away from the Juul flavored liquid that must be added to vaping devices and towards the self-contained, disposable vaping devices including the popular Puff Bars brand. “It has the juice already in it,” says Malee. The law, however, will also outlaw the self-contained Puff Bar devices in Fallbrook and the rest of the unincorporated parts of the county.

Malee and Elfarra say they would consider joining a lawsuit against the county if one materialized.