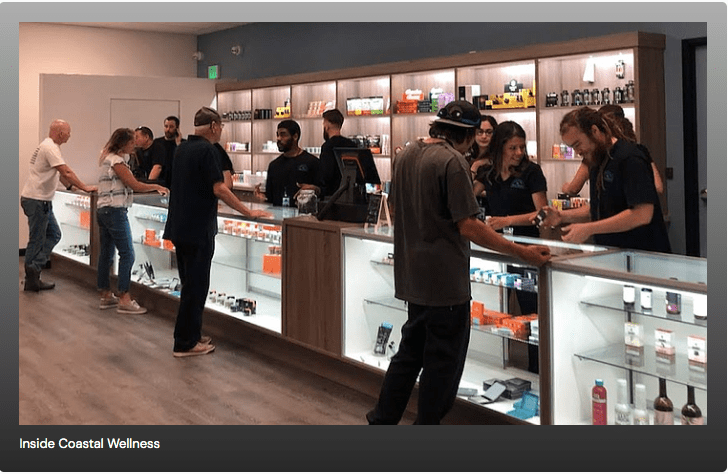 The City of Vista is rolling in weed money, and it’s only going to increase.

Vista became the only city in North County to allow cannabis dispensaries when the citizen-sponsored Measure Z passed in 2018. Its passage forced the city to allow 11 storefronts to get licensed to sell “medical” pot to adults with a doctor’s note. The first one opened in October 2019, the last in February of this year. The lack of criminal activity and the unexpected tax windfall to city coffers encouraged the Vista city council to allow all 11 dispensaries to also sell cannabis to recreational users.

In Vista you no longer need a medical excuse to buy Blackout Brownie, Grape Ape, or Bubba Kush.

Coastal Wellness became the first shop to get a license to begin selling “recreational”” cannabis on August 12. “Our business was up 60 percent in the first day,” says owner Mike Mellano about his store’s bumped-up bottom line. “And all that came from new customers. Over our first five days selling recreational, we’ve averaged a 58 percent increase in sales.”

Mellano says some people just don’t want to bother with a medical excuse. “Some people are leery of them. People perceive it as getting on a list. Even though that’s not the case, that’s the perception. By allowing adult-use [recreational] we’re able to capture a whole new set of customers.”

City clerk Kathy Valdez oversees Vista’s cannabis licensing. She says seven other dispensaries have also just been approved including March and Ash, Hello Cannabis, Off the Charts, Stiiizy, doctorgreenrx, Speedy Weedy and The Cake House. She expects Vista’s other three, Urbn Leaf, Flora Verde dispensary Vista and Tradecraft Farms, to get approved within the next week.

Vista has contracted with the Orange County auditing firm Hinderliter, de Llamas & Associates to begin performing financial audits of its dispensaries beginning this month. Up to now Vista’s dispensaries have paid their 7 per cent sales tax through their own self-reporting. That honor system yielded an eye-popping $1.5-million to Vista’s general fund for the most recent quarter, April/May/June. This anticipates a $6-million annual boost to Vista’s city hall budget.

That $1.5-million quarterly sales tax figure does not include an annual $19,967 fee which each dispensary pays to cover the City of Vista’s costs to oversee their pot shops. After complaints were filed by the dispensaries, those annual fees were lowered from $28,000.

“It is still an excessive amount, but I’m glad they took a more true-cost approach to this,” says Justin Christman, co-owner of Flora Verde about the readjusted fees. “It’s hard to make a living at this.”

“We were definitely surprised,” says Valdez when Vista’s pot tax income first topped $1-million for the quarter ending September, 2020. “I will also say we have not had many calls [to the sheriff department for criminal activity].” Mellano maintains beer causes more trouble than pot. “The metrics show that breweries get more [police calls] than dispensaries,” says Mellano.

When it became clear that Vista’s cannabis tax income was way over projections, its city council decided in April budget discussions that all annual cannabis tax income over $4-million would not be returned to the dispensaries in the form of tax reduction, but would instead go towards a yet-to-be-named earmark like youth sports, infrastructure or education.

“I would have liked to have seen a fee decrease to help mom-and-pop businesses like us survive,” says Flora Verde’s Christman. “But having been born and raised in Vista, I am glad to see they will be giving 100 per cent of that extra tax money back to the community. It’s clear we’re not high on their priority list. If it’s not going back in our pockets, at least it’s going somewhere good.” Christman says the city council first accepted dispensaries three years ago – kicking and screaming. But now we have a city council that is unanimously behind us.”

But what could derail Vista’s marijuana gravy train? Mellano estimates that two-thirds of his business comes from those who live outside Vista. If adjacent cities were to follow Vista’s lead, any new cannabis emporiums outside the city could eat into Vista’s market share. “Encinitas is next,” Mellano predicts. He says it is unclear if other area cities will take the plunge.

Both Mellano and Christman say their thriving business model is less threatened by other legal dispensaries than by the countywide black market.

“We constantly hear about law enforcement shutting them down,” says Mellano about the illegal shops that keep popping up. “It used to take them about three to six months to shut them down, now it gets done in about a month. It seems like they are putting more resources in that effort.”

Still, County Supervisor Joel Anderson says the county needs to step up its enforcement of illegal dispensaries, many of which are located in his back-country district that includes Alpine San Carlos and Spring Valley. Last week he urged his fellow supervisors to direct the district attorney’s office to “go after the landlords who are in bed” with the illegal dispensary operators by passing an ordinance that would allow the county to usurp their property. Anderson says 64 illegal dispensaries were shut down in six months and that they were responsible for illegal weapons, fires, and shootings and may very well be selling cannabis tainted with hard drugs or poison.

At their August 17 meeting the supervisors unanimously voted to approve the item.

There are five dispensaries that operate legally in the unincorporated areas of the County. Three are in Ramona including Releaf whose general manager Megan only wanted her first name used for this article. Megan says the switch of the board of supervisors to a Democrat majority in November helped the plight of the five shops in unincorporated San Diego County. The new board reversed a sunset ordinance that would have mandated all five close up shop in April 2022.

“The only person still on the board who doesn’t want medical or recreational marijuana is [North County-based Supervisor] Jim Desmond,” says Megan. “For the most part the other four support support what we are doing.”

The new board of supervisors has directed staff to put together a new comprehensive cannabis law that will allow those five dispensaries to also sell to recreational customers, and will allow them to increase the foot-print of their retail space by 10,000 square feet. Megan says that the five shops are united and do not support Desmond’s reelection next year. “We would not go out and fight Desmond, but we would support someone who would run against him who is more open to cannabis.”

Supervisor Desmond has been known to say, “I wouldn’t want a dispensary in my neighborhood, so I’m going not to vote to put one in yours.”

That new law will allow new dispensaries in the unincorporated areas of the county but not until the second half of 2023. Part of that new ordinance set to be brought forward in October, calls for a Social Equity Program that would provide individuals with past cannabis arrests and/or convictions with a greater chance to secure a county permit to operate any new dispensaries in the county.

Desmond is against the new ordinance and its social equity provision. “This is an absolute assault on the unincorporated areas of the county,” says Desmond’s deputy chief of staff Ben Mills. “We shouldn’t be rewarding bad behavior and that’s exactly what this ordinance will do.”

Meanwhile Vista’s Mellano and Christman say Supervisor Anderson’s focus on illegal storefront dispensaries does nothing to address the worst part of the cannabis black market. “It’s nearly impossible to track and trace [deliveries].” says Christman. “It’s an almost impossible endeavor to track who is driving around to deliver cannabis illegally.”