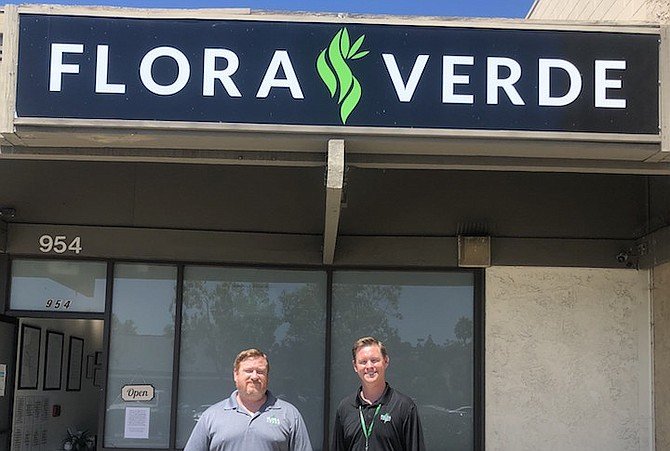 By playing by the rules and turning in an estimated $175,000 a month in extra tax dollars the city of Vista has rewarded its six pot dispensaries with a remarkable thank you gift.

“They told us we are turning in three times what they expected,” says Justin Christman, owner of Flora Verde which has been open since October.

He did not expect what was came next. 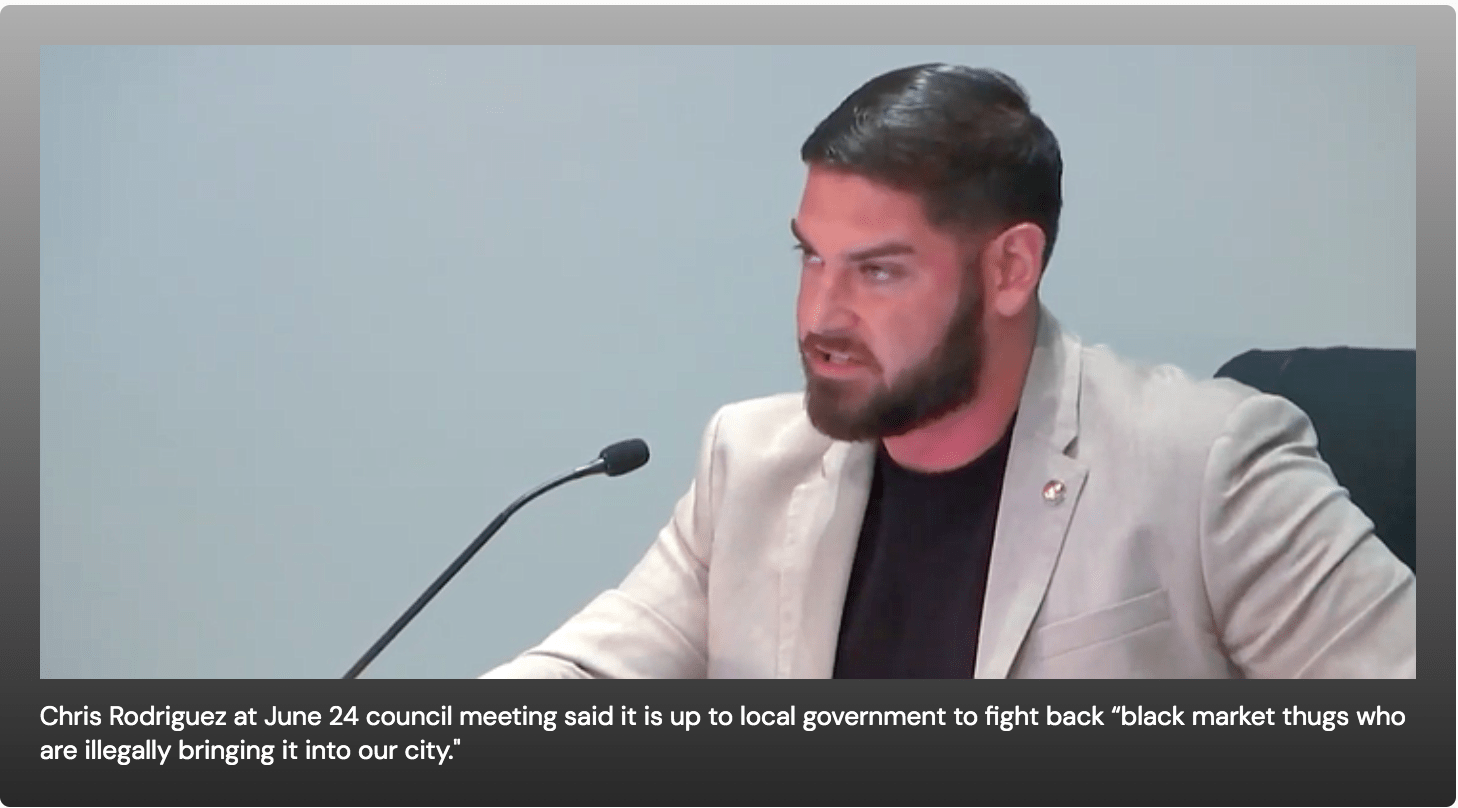 “Our annual business license fee used to be $640 a year,” says Christman. “They just told us it will now be $28,000. We never got a phone call or any discussion that this was even being considered. It’s a fucking joke.”

All six Vista dispensaries are medicinal only which means all customers must have a doctor’s note to wrest their weed.

Christman says the reason the city of Vista gave for this mandatory 4375 percent increase in fees was that it will cost Vista that much to launch a new accounting program, where a city-hired auditor will come on site to do extensive auditing at each dispensary. He says this increase is “…not legitimate. There is no way it will cost them that much money and take that much time to do this. What they are trying to do is come in and look at our books.”

City clerk Kathy Valdez oversees marijuana licensing in Vista. She says that the new $28,000 fee passed by the city council June 23 is not actually a business license fee, but rather a “required auditing fee” that all dispensaries must now pay beginning with the current fiscal year that began July 1. Valdez says the city has hired an outside consultant to determine if the $28,000 amount is too high and if so, it could be adjusted downward after the first year.

None of the Vista dispensaries contacted wanted to divulge their monthly tax payment to the city. Some estimate that the busiest dispensaries pay as much as $75,000 a month. City Clerk Valdez says that as of June 30, the six turned in $1.3 million in new, so-called Measure Z taxes, named after the initiative that forced the city to allow medicinal dispensaries to open.

News of Vista’s pot tax windfall reached Oceanside city councilman Christopher Rodriguez who just announced he is running for mayor. At Oceanside’s June 24 council meeting he gave a dramatic speech that referred to the Vista model as the right way to tax and regulate this inevitable industry, and urged his fellow councilmembers to allow the opening of its own storefront dispensaries.

His plea struck some as an earnest desire to look out for area youth. Others saw it as a return to Refer Madness hysteria.

“My father was a Latin King,” Rodriguez said at the June 24 meeting in explaining that his father was a gang member. “He moved cocaine and dealt drugs.” But marijuana, says Rodriguez, was his “beginning.” And now, the Chicago native, the evils of marijuana have hit Oceanside. “Two-thirds of the marijuana that’s circulating through our city right now is from illegal operations.”

The Republican gave his take on the role of government. “It’s government’s responsibility to look at facts and think ‘How can we stop the black market?’” Rodriguez says it is up to local government to fight back “black market thugs who are illegally bringing it into our city and funneling it to our kids and who are now using it more than alcohol.” He said it’s up to him and his council colleagues, “…to put an end to the thugs’ game.”

Rodriguez dramatically implored his council colleagues to schedule a special meeting in July so it could craft a ballot initiative in time for the November ballot. (Oceanside city council traditionally takes the month of July off). That initiative would have asked Oceanside voters to approve dispensaries. He pointed out that Vista’s six legal dispensaries are helping to keep minors from getting marijuana. He suggested Oceanside should be getting some of that pot tax that is enriching Vista.

The council said no to Rodriguez’s request for a special meeting in July. As a result, there will not be a dispensary question on Oceanside ballots in November.

But Rodriguez’s rant appeared to be calling one of his fellow candidates on the November ballot a thug. Amber Newman and husband David have long been supporting legalized cannabis in Oceanside. The Newmans own A Soothing Seed which has been making door-to-door deliveries to individuals for years. David Newman told me in April that they plan to continue operating A Soothing Seed.

When asked by email if he meant to call a fellow candidate a thug, Rodriguez responded: “Those that sell and illegally profit from minors are thugs. If the Newmans illegally sell to minors, then yes they fit my statement.” Amber Newman did not respond to a request for comment.

The Oceanside Police does not actively pursue illegal marijuana delivery services. OPD Lt. Matt Cole has said there is not noticeable crime activity connected with the deliveries. City attorney John Mullen declined to comment on Oceanside’s decision to make on illegal delivery services a low priority.

Three members of the legal cannabis industry in North County all wish there would be more enforcement of illegal deliveries. But they do not agree with Rodriguez’s “thug” slur.

Mike Mellano owns Coastal Wellness Dispensary in Vista and would like to eventually open a similar shop in Oceanside. He says it is not fair that he will be paying the new $28,000 Vista fee as well as an additional $40,000 a year in annual license fees to the state Bureau of Cannabis Control while those who drop weed off at houses pay nothing.

“I don’t know if I would have used [thug], but it is absolutely unlawful what [illegal delivery services] are doing. What do you call a person who is committing a crime?”

“Calling anybody out like that is unprofessional, and will not get us where we get to go,” says Flora Verde’s Christman. “I’m opposed to the black market as much as anybody out there. They are getting an unfair competitive advantage. It’s not a level playing field. However, I don’t blame the black market because the barrier to even enter the market from the financial and regulatory standpoint is asinine.”

“I feel there are better terminologies [than thugs],” says Gracie Morgan of Oceanside’s first and only dispensary called Medleaf which opened two weeks ago. Medleaf is delivery-only, which means it will be competing legally against A Soothing Seed and all the other delivery services which aren’t licensed.

She says illegal storefronts get immediate attention by law enforcement, but that delivery services just don’t get the same attention. “We haven’t seen pressure applied to all of the illicit market.”

While dispensaries in Vista and Ramona often opened with much fanfare and Chamber of Commerce-sponsored grand opening events, Medleaf’s opening was kept on the down-low. Morgan says she did not want the exterior of her building photographed for this article. She declined to go into specifics on current business volume.